The Pierre Fauchard Academy is currently comprised of over 10,000 Fellows divided into 120 sections, 55 in the United States and another 65 in many other parts of the world, including South America, Europe, Asia, Africa and Australia.

The membership is made of dentists who are among the most outstanding leaders in various fields of dentistry.  Fellowship is by invitation only and must have the approval of the Section in which the candidate resides or practices.

The Academy is administered by a Board of Trustees consisting of four Officers and ten Trustees from around the world. Section organization includes a Chairperson and such other officers or committee members as the Section may elect. The administrative office of the Academy is located in Logan, Utah, U.S.A.

Pierre Fauchard Canada, Region 6 representing 5 regional sections is a component of the Pierre Fauchard International Academy, registered in the U.S. as a nonprofit organization TIN # 410648891 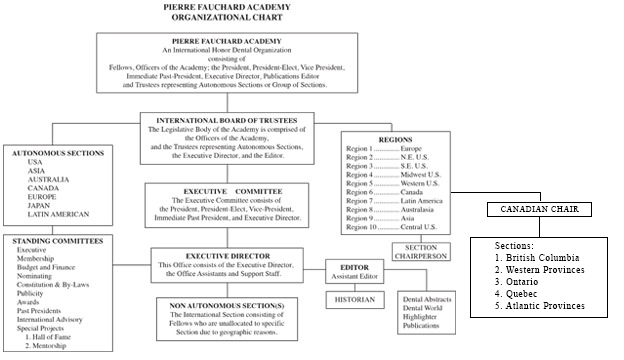